"We skinned up out of Porkies and cut across the top of Malan's, which showed signs of lots of wet, heavy slides from the previous warm days.  The surface was hard, bonded, and concrete.

We made out way down the ridge separating Malans from Taylor Canyon and decided to drop in east of the burn.  We skied down the south side of the ridge in hard, but slightly softening snow until we made it around the major rock outcrops.

We skied over the ridge and decided to ski into Taylor Canyon. We made 6-8 turns in gorgeous wind deposited powder snow above the trees, then cut one or two hundred yards west through dense trees to a more open area on the top of our run.

We skied one pitch down a wide area that narrowed into a gulley 150 feet east of where I would eventually slide.  We took turns and once my partner was down with me in the trees, I cut to the west looking for another line to ski out of the funneling gulley.  We cut west in an open area fifty feet above more closely spaced trees.

I stopped when I saw a gap to ski.  I turned to tell my partner I was skiing the gap when he yelled that I was sliding.  It broke above and around me and slowly started to move.  I was quickly knocked off my feet.  I deployed the airbag, and while the slide was moving relatively slowly I hoped to grab a small tree, but as it accelerated through the gap I just tried to avoid the trees. My skis stayed on for the entire slide.

The slide spilled out into the major ravine and turned left.  It slowed down in this ravine, and while it ran quite a ways down the drainage, I was able to come to a stop on the edge of the drainage.

I told my partner on the radio that I was fine and he cautiously skied down to me.  I deflated my airbag, gathered one pole.  We continued down and out the canyon.

1. While the avy danger is low, and these dangerous pockets are scarce, we were in very high consequence terrain with 35+ degree slopes and trees.  We should have continued farther down to the burn and skied lower angle areas.

2. We were prepared and worked well as a team - proper spacing, skiing one at a time, talking about the dangers, slope angle, aspect, etc.  Our beacons were on and my ABS bag was armed.  This all helped mitigate what could've easily been a worse situation.

3. My partner was very surprised about the slide and unsure what to say.  He thought the slide might just be sluff.  His call is what let me know for certain that I was caught in a slide.

4. The slide was absolutely silent.

5. Proper spacing between us kept him from being caught in the slide, too.

6. The radios were critical and I was able to let my partner know I was uninjured and not buried.

7. I remained calm during the ride, but during the last half of the ride it would've not been good if I hit a tree.  That's what was really on my mind after the bag inflated.

8. Good thing I had the instruction card for the ABS or I wouldn't have known how to deflate it.  (We looked pretty silly reading instructions over an inflated bag). "

My best guess; this was a newly formed windslab from yesterdays (3/20) heavy winds.  The wind slab appeared to have failed on the NSF (Near Surface Facets) or Surface Hoar that have formed in areas like this over the past week with cold clear nights.  These avalanches will be pockety in areas that are protected.  This was a small wind slab (30' wide) that could not burry a person but a scary ride none the less.   The  party was carrying avalanche rescue gear and was practicing safe travel protocols.  This helped only one person get caught and they were able to ski away.   A similar accident occurred in Stairs Gulch of BCC (SLC) yesterday.  Link (https://utahavalanchecenter.org/avalanche/46181) 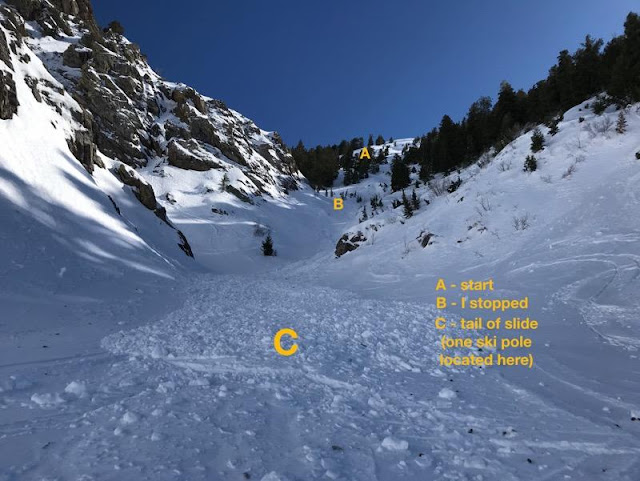 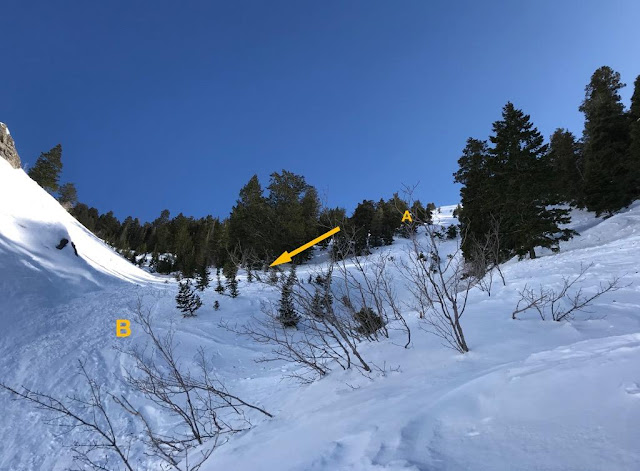 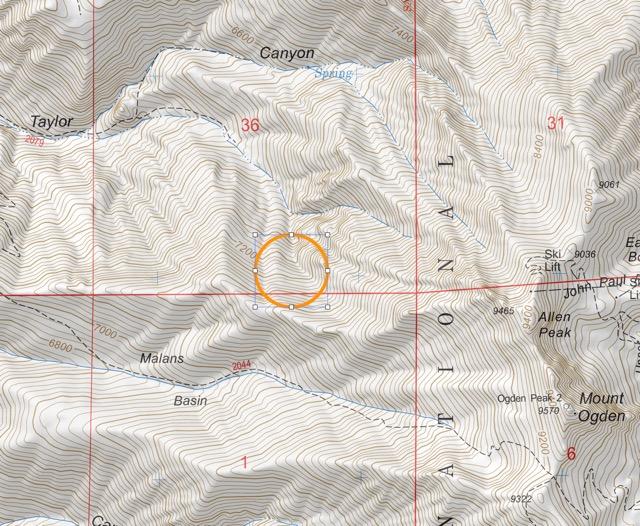